UPDATE, May 16, 2013: Disney has stated that 1. the 2D image was never on their official web site in the first place (though, oddly, it’s all over the official Australia/NZ version of the Disney Princess site–which may have been the source of any confusion), and 2. they will not be retracting the new Merida.

Click here for my new post, in which I argue they missed the whole point of the petition. Clearly, we still have work to do.

On Saturday, Disney held a “coronation ceremony”(1) for Merida, star of the Disney-Pixar film Brave. In the coronation, Merida officially became part of the Disney Princess lineup. This means that her image has been added to the 2D collection of princesses in a cartoon form that fits stylistically with that of her princess peers.

Unfortunately for Disney, the new cartoon image of Merida that Disney created for the lineup overshadowed all conversation online about the coronation. The reason? The new cartoon sexualizes Merida.

That’s right: Although Merida was created by a woman as a role model for girls, the male-dominated consumer product division at Disney has ignored the character’s intended benefits for young girls, sexualizing her for profit. 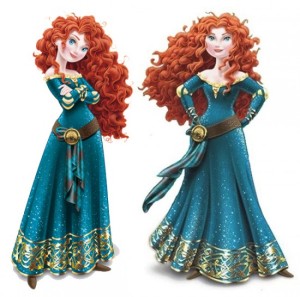 Compared with her film counterpart, this new Merida is slimmer and bustier. She wears makeup, and her hair’s characteristic wildness is gone: It has been volumized and restyled with a texture more traditionally “pretty.” Furthermore, she is missing her signature bow, arrow, and quiver; instead, she wears a fashionable sash around her sparkly, off-the-shoulder gown. (As Peggy Orenstein noted when she broke the news of the redesign, “Moms tell me all the time that their preschool daughters are pitching fits and destroying their t-shirts because ‘princesses don’t cover their shoulders.'” I’ve heard the same from parents, as well.)

It doesn’t have to be this way. Some might argue that the changes to Merida are simply a result of her being rendered in 2D, but these are deliberate, calculated changes. She has been presented in 2D form in children’s books since before the movie was released, and she’s still looked like herself.

No–these changes to Merida’s appearance are significant. Sadly, they align with the American Psychological Association’s definition of sexualization, which says that sexualization occurs when any of the following four conditions are present:

Since Merida is beloved for breaking the princess mold, proving that a girl needn’t be stereotypically “girly” to be a princess, realigning Merida’s look to echo the other 10 Disney Princesses’ narrow range of appearances is a huge mistake.

The backlash from parents has been tremendous; a petition on Change.org already boasts more than 120,000 signatures. The petition explains:

The redesign of Merida in advance of her official induction to the Disney Princess collection does a tremendous disservice to the millions of children for whom Merida is an empowering role model who speaks to girls’ capacity to be change agents in the world rather than just trophies to be admired. Moreover, by making her skinnier, sexier and more mature in appearance, you are sending a message to girls that the original, realistic, teenage-appearing version of Merida is inferior; that for girls and women to have value — to be recognized as true princesses — they must conform to a narrow definition of beauty.

They have been handed an opportunity on a silver platter to give their consumers something of more substance and quality — THAT WILL STILL SELL — and they have a total disregard for it in the name of their narrow minded view of what will make money. I forget that Disney’s goal is to make money without concern for integrity. Silly me.

As of today, Disney has quietly pulled the 2D image of Merida from its website, replacing it with the original Pixar version. Perhaps we’ll be spared an onslaught of sexy Merida merchandise yet.

If you haven’t yet signed the petition, you can do so at Change.org and at MoveOn.org.

About the author: Rebecca Hains, Ph.D. is an associate professor of communications at Salem State University, where she teaches advertising and media studies. Her new book, Confronting Cinderella: Guiding Our Girls Through the Princess-Obsessed Years, will be released by Source Books next year.

(1) Disney holds “coronation ceremonies” for its princesses about a year after a film’s release–a great way of bumping up interest in a princess after her film’s momentum has died down.

← More on teaching boys not to rape
Cartoonists and animation experts weigh in: the new Merida doesn’t HAVE to look this way →