Princesses: They’re everywhere. Over the past decade, marketers have made “princess” a synonym for “girls. They use princesses as shorthand—a way of saying, “Hey, girl: Buy this!”

But ever since Peggy Orenstein spelled out the problems with princess culture in Cinderella Ate My Daughter, parents have come down with a serious case of princess fatigue. Sure, princesses are still popular—but in many corners, parents are so over it.

The girl culture industry is savvy, though. Aware of the pushback, they’re changing tactics. They’ve been working hard to rebrand “princess” as the equvalent of “empowerment” — as today’s girls’ version of girl power. (See this Disney ad, for example.)

The problem is that despite the branding, princess culture is very limiting. Marketers can claim “princess” has the capacity to empower girls all they want; but at the end of the day, in the marketplace, princess culture always reduces girls’ interests to being pretty and finding romance—as the Disney Consumer Products Division redesign of Merida from Brave proved.

As a result, the ubiquity of princesses actually limits young girls’ imaginations. They aren’t seeing many other versions of girlhood promoted to them. Although there are many ways to be a girl, pop culture is showing girls too many minor variations on the princess theme and calling these similar items “choices”—selling girls short in the process.

The upshot is that today’s girls are like the sailors in Coleridge’s famous, poem “The Rime of the Ancient Mariner.” They’re adrift in a sea of princesses, and their imaginations are parched. Being sold on princesses everywhere they go—from toy stores to grocery stores to hardware stores—makes our girls’ worlds shrink.

Nor any drop to drink.

So with this in mind, I’ve been intrigued to see two anti-princess ad campaigns go viral in recent days. Let’s take a look at them.

First, there are the advertisements for the all-girls’ Mercy Academy in Kentucky that tells prospective high school students, “You are not a princess.” “Life’s not a fairy tale.” “Don’t wait for a prince.”

These ads all feature the tagline “Prepare for real life.” They clearly speak back against the princess fantasy marketers have been pushing to young girls for the past decade, and they speak the truth to girls: that studying hard and preparing for college is what it takes to succeed in today’s world. Not romance. Not marriage. Not a glass slipper.

The fact that the ads have circulated all over the internet speaks volumes. People have been cheering for them, expressing delight. They are thrilled to see an ad for a girls’ school directly contradict princess culture. (People have also been expressing surprise that a Catholic academy, in particular, would be so progressive. I’m not surprised, though; as an undergrad, I attended Emmanuel College when it was still an all-women’s college, and nuns can be far more feminist and forward-thinking than stereotypes would suggest!)

In a similar vein, a new ad for GoldieBlox has gone viral, gaining 3.5 million views on YouTube in the past three days alone. GoldieBlox is a toy meant to be educational, to inspire girls to become engineers. As such, their ad is a complete pushback against princesses. It argues against the idea that girls get pink princess stuff while boys get everything else. The fierce little girls in the ad sing about wanting a change: they say they can use their brains and engineer, because — like the girls in a previous GoldieBlox ad sang — they are more than just princesses.

Clearly, this ad’s virality shows that GoldieBlox is tapping into the same princess fatigue that has catapulted the ad for Mercy Academy into the spotlight. Parents are cheering it on, expressing delight for an ad that’s making such a great case for girls having diverse interests—for loving to build and create things—for having imaginations capable of expanding to include STEM-type activities.

But there’s one problem: the new GoldieBlox toy that this ad promotes, which appears on screen for only a few seconds, is actually princess-themed. Yes, really. It’s called “GoldieBlox and the Parade Float,” and its promotional copy reads as follows: 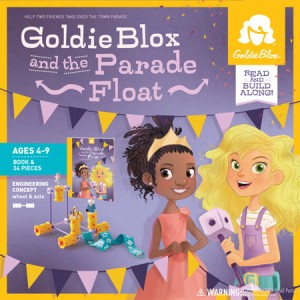 “In this much-anticipated sequel, Goldie’s friends Ruby and Katinka compete in a princess pageant with the hopes of riding in the town parade. When Katinka loses the crown, Goldie and Ruby team up to build her a parade float as well as other fun rolling, spinning, and whirling designs.”*

I read the book, and here’s a quick summary of the plot. Ruby (the African-American girl) has been preparing for “the biggest event of the school year”: the “Miss Princess Pageant.” Goldie assures her she’s going to win, but their friend Katinka—a pink dolphin—exhibits mean girl behavior and is determined to with the crown. (She butts into the competition, saying rudely, “Step aside, girls. You’re making me yawn. Judges watch ME as I twirl my baton.”)

When Ruby wins the Princess Pageant, Katinka bursts into tears. The girls are kind and want to make her feel better, despite her mean behavior. So, what do they do? I was hoping they’d engage in some other activity together and assure her that princesses and pageantry aren’t very important. But that’s not what happens. Instead, Ruby and Goldie build a float that Katinka can ride on, too. It ends with the whole town cheering “for Katinka and Ruby, the Miss Princess Engineer.”

So, taken together, the GoldieBlox campaign and product leave me scratching my head. Unlike the Mercy Academy ad, which tells girls they are not princesses and offers education as an antidote, GoldieBlox as a brand is speaking out of both sides of their mouth. GoldieBlox claims to be anti-princess. It depicts girls who declare they are not princesses and who want to learn interesting new things, and it offers their toy as a solution; but then it turns around and offers girls a “princess parade” toy to play with.

And while it seems everyone has seen the new GoldieBlox advertisement, almost nobody realizes that the ad itself is for a princess-themed toy! (Every time someone has shared the ad with me, I’ve asked if they knew this; the answer has been a uniform and surprised-sounding “No.”) So GoldieBlox is having it both ways: appealing to parents with anti-princess rhetoric and then, in stores, selling girls on a princess-themed toy.

This is disappointing. I have been rooting for GoldieBlox since their Kickstarter days, and I love their mission to break stereotypes and spark a love of STEM in girls. But by pandering to princess culture, this new offering just isn’t living up to the promise.

So, I have to wonder: Why is this happening?

Here’s my take. While a school like Mercy Academy can sell girls on not being princesses and deliver on their promise to educate them in a princess-free environment, independent brands like GoldieBlox walk an awfully fine line in the marketplace. When they try to provide girls with something different, something STEM-oriented, they wind up swimming in a sea of princess products. They are competing with everything from the girly-girl LEGO Friends line (which also drew heavy criticism upon its release) to Barbies and Disney Princesses. So, to get picked up by major retailers and better appeal to girls shopping in toy stores, GoldieBlox apparently has to take a product meant to be non-conformist—as indicated by the ad campaign—and conform to the dominance of princess culture.

Sigh. If that doesn’t prove that “princess” is the dominant marketing force in girl culture, I don’t know what does.

So, while I support the GoldieBlox mission, I’m concerned. I’m concerned that by using stereotypes to sell girls on STEM, GoldieBlox is unwittingly selling itself short—and, therefore, selling girls short in the process.

*[UPDATE, 11/20/2013, 8 p.m. EST: In the aftermath of a twitter conversation with GoldieBlox in which I expressed my concerns, the company has revised their description to conclude as follows: “When Katinka loses the crown,Ruby and Goldie build something great together, teaching their friends that creativity and friendship are more important than any pageant.” Here’s a link to the original version via the Internet Archive.]

Readers: What’s your take? Let me know in the comments below or on my Facebook page.