Yesterday, for-profit T-shirt company FCKH8.com released a video called “F-Bombs for Feminism: Potty-Mouthed Princesses Use Bad Word for Good Cause.” The video features five angry girls, ages 6 to 13, who express outrage at society’s sexist treatment of girls and women while decked out in princess attire.

The video opens with the girls sweetly cooing, “Pretty!” while posing in their gowns and tiaras. But three seconds later, they switch gears and shout: “What the fuck? I’m not some pretty fuckin’ helpless princess in distress. I’m pretty fuckin’ powerful and ready for success. So what is more offensive? A little girl saying ‘fuck,’ or the fucking unequal and sexist way society treats girls and women?”

As the video progresses, the girls review the ongoing issues of inequality, systematic discrimination, and sexual violence faced by women in the U.S. They pepper these facts with more f-bombs, of course.

This combination of pretty pink princesses and relentless use of the f-word is potent and clearly calculated to provoke. And provoke it has: For the shock value alone, everybody’s talking about this video.

But in all the conversation about whether the video is offensive, we need to also consider the ad from a media literate perspective and consider FCKH8’s corporate interests.Was it right for FCKH8 to script a slew of swear words into an advertisement featuring young children?

If we follow the money and consider FCKH8’s motivations in producing “F-Bombs for Feminism,” it’s pretty clear that FCKH8 is in the wrong. Although the video purports to be “for [a] good cause”—presumably, to raise awareness of sexism—what they’re really promoting is their t-shirts. By putting FCKH8’s bottom line ahead of girls’ best interests, FCKH8 is being exploitative.

In fact, “F-Bombs for Feminism” betrays a social media marketing perspective devoid of ethics. The video’s ethos is so steeped in a “Generation Like” mindset that having the video widely “liked” and “shared” is clearly what matters most—resulting in the company’s decision to push girls as young as age six into the roles of cultural provocateurs. 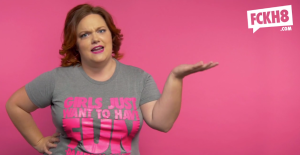 As a social media marketing strategy, it worked brilliantly. The video went viral almost instantaneously, prompting heavy traffic to FCKH8.com. There, t-shirts proclaiming “This is what a feminist looks like” and “Girls just want to have fun-damental rights”—as worn by the women appearing at the video’s end, of course—are up for sale.

Sadly, despite what major corporations and indie brands alike would have us believe, empowerment can neither be bottled nor sold. Commodification of feminism is not empowerment, and FCKH8 is not empowering girls or women through this video. Instead, they’re using girls as a means to a commercial end: to raise awareness of sexism to sell their t-shirts.

How ironic that a company that positions itself as feminist has no problem commodifying children in this way. Where is their sense of corporate responsibility? The ends don’t justify the means, and they never should have produced this ad.

I would feel differently if a video along these lines had been produced by girls as a way to find an audience for their authentic voices. If a group of young girls were passionate about combatting sexism in the U.S. and had decided to produce a video to raise awareness on the matter, and realized they could get their message out by swearing up a storm, more power to them—I’d applaud them for their creativity and media savvy.

But that’s not the case here. This video was scripted and slickly produced by a t-shirt company that evidently has no qualms about exploiting girls who are too young to understand the implications of the script they’re bringing to life.

So, my advice is this. Let’s stop debating whether we’re offended by little girls saying “fuck” and focus on the heart of the matter, instead: By putting adult words into children’s mouths, FCKH8 is exploiting girls in this advertisement. End of story.

Since I wrote this piece yesterday, I’ve had some really terrific conversations with people who care about this issue—both with those who love the video and those who are critical of it. A few points I’d like to share:

1. Some readers have asked why I feel it’s a problem that FCKH8 is a for-profit t-shirt company. After all, they’re donating some of their profits to deserving charities and delivering cool tee shirts to people, right? Wrong. The slogans found on the FCKH8 t-shirts were appropriated from other feminist nonprofits. For example, the Feminist Majority Foundation has been selling “This is what a feminist looks like” tees since at least the mid-1990s. So despite their promises to support charities with their t-shirt sales, FCKH8 is actually siphoning money away from feminist charities by stealing their ideas.

Furthermore, quality charities have refused to take FCKH8’s money in the past, because FCKH8 is incredibly problematic. They’ve been accused widely of being transphobic (as a quick google search will show), and their anti-racist work is of dubious merit. For example, their response to Ferguson raised so much ire in the anti-racist community that Race Forward—one of the charities originally listed on FCKH8’s page—announced publicly that they were refusing donations from the company.

So to those who are saying that FCKH8 is a company that’s doing it’s best to promote social justice, and we should cut them some slack? No FCKHing way.

2. Some readers have argued that the girls aren’t being exploited because they’re old enough to understand the concepts in the video. But as well-regarded educational psychologist Lori Day weighed in below in the comments,

“The older girls probably understand, but the younger ones have gotten an acting gig. They probably have stage parents all too happy to put them on the internet. The ad could have been more effective without using the girls in this way and by letting their authentic voices shine through. Sometimes less is more, and this is one of those times. I found this ad to be clickbait on top of a vehicle for selling t-shirts, and that’s ok for adults if they want to do that, but 6-year-olds? I don’t think so. I’ve worked with kids that age for 26 years. They can understand some aspects of sexism, but much of this video is above their heads, the the f-bombs were more than provocative–they were exploitative.”

3. Some readers are insisting that anyone concerned about the video isn’t outraged enough about the structural inequalities described in the ad. However, outrage is not a zero-sum game—even though FCKH8 did some very savvy and disingenuous work in framing it that way, to pit viewers against one another. Think about it: It’s possible to be completely outraged by structural inequality AND ALSO find the video outrageous and/or exploitative.

4. Another commenter, Eliyanna Kaiser, raised a point in the thread below that I’d like to highlight, as it’s an important one to consider. She writes:

“Also, remember that diapered, African American Nebraska toddler who was the subject of a viral video that his family took (and foolishly posted) where he cussed up a storm? It wasn’t for a “cause” (or a for-profit enterprise), but that little boy was taken away from his mother by child services. It’s really weird how this is all meta-debate about whether or not it’s cute and empowering to watch little girls swear or whether it’s exploitative of them — but in the context of poor people not doing it for profit it’s the kind of shit that gets your kid taken away.”

In other words, there’s race, class, and consumerist privilege at play in the fact that FCKH8 expects to be lauded for having kids play-act in ways that gets actual kids of colors removed from their parents’ homes.

5. The blog “The Belle Jar” made a post that elaborates in greater detail as to why the FCKH8 ad is exploitative, and I highly recommend it. Here’s a preview:

“There is for sure nothing feminist about having girls as young as six years old discussing rape and sexual assault; I would hope that at that age, most kids have never even heard the word rape, let alone had to recite rote facts on it for an audience of thousands, maybe even millions. I feel sick that these children are being taught about subjects like rape just so that a t-shirt company can make a provocative advertisement. The point that especially crosses the line between “this is problematic” and “I want to flip a table” is the moment where the five little girls spout off the statistic that one in five women will be raped in their lifetime, and then ask which of them it will be. Having a little girl demand to know if she’ll be raped just so that you can sell a few shirts is so far beyond the realm of what should be acceptable that I have no words for it.”

6. Still think there’s nothing of merit to complain about in the FCKH8 “F-Bombs for Feminism” ad? Check out this great list that reader Deanne Carson devised and posted publicly in the Women You Should Know facebook thread about my post:

Thanks for reading and engaging, everyone—this has been a really informative conversation.

P.S. I’d like to thank The Christian Science Monitor and Women You Should Know for cross-posting this piece, and Bitch magazine for sharing this post with in yesterday’s Feminist News Round-Up.

Rebecca Hains is a media studies professor at Salem State University. Her book, The Princess Problem: Guiding Our Girls Through the Princess-Obsessed Years, is now available from retailers including Amazon.