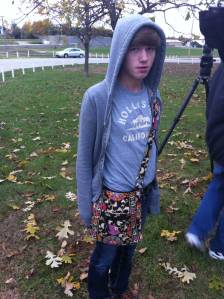 Boy with handbag: a menace to society?

For several weeks, an eighth-grade boy outside of Kansas City has been expressing his individuality by carrying a floral-print Vera Bradley purse. But yesterday, his assistant principal demanded he remove it. The boy refused, and he was immediately suspended from school.

This raises a question: Why is it a problem for a boy to carry a purse instead of a backpack if he wants to? By breaking gender stereotypes, he’s not hurting anyone. Instead, he’s showing the world that he has good self-esteem and self-confidence—that he is secure his identity.

Unfortunately, his school administrators’ actions show that they want to force a 13-year-old kid into stereotypical masculinity. Apparently, they value gender conformity over creativity and individuality.

There are the Bronies—the fans of the show My Little Pony: Friendship is Magic—that have been erroneously judged by some as deviant for enjoying a show intended for young girls.

There was the little boy who wore pink toenail polish in a J. Crew ad—sparking controversy and labeled by some as “propaganda.”

And there was the little boy whose Halloween costume—Daphne from Scooby Doo—resulted in nasty criticism and widespread judgment.

It’s sad, really. When our society treats anything associated with femininity like a deadly pathogen that threatens masculinity, it tells us three things:

I hope that as a society, we very soon reach a point where kids can just be who they are without being squelched by the authority figures around them. Because honestly, I think that boy ROCKS that handbag!

267 Comments on “School suspends teen boy for carrying purse. Why???”