Challenging our assumptions: Is there anything good about Bratz?

Bratz dolls came back on the market this fall. They’d been out of production for a few years while their maker, MGA, fought a legal battle with Mattel. MGA emerged victorious—and critics everywhere shook their heads. What good can come of girls playing with sexy toys—toys that the American Psychological Association has singled out in a report [pdf] as contributing to the sexualization of girls? 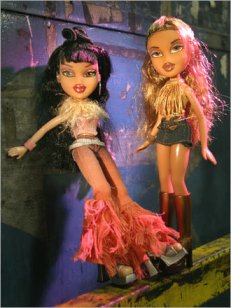 I am no fan of Bratz. A few years ago, at the height of their popularity, I witnessed little girls’  delight in Bratz “fashionable” clothing—their revealing, age-inappropriate styles.  One girl asked her eight-year-old friend, “Do you wish you could dress like the Bratz dolls?”

Her friend replied longingly: “Oh, I do!”

Children are full of surprises—and while I was conducting research for my book, Growing Up With Girl Power, I spent a lot of time with girls. Enough to experience the unexpected.

One afternoon, a group of girls shared their Bratz dolls with me. And much to my surprise, as their play got underway, they decided to ignore the dolls’ clothing completely. The reason?

They were using the dolls to “play slaves.”

As their collaborative play unfolded, these girls–who were African-American–acted out a chapter of U.S. history, focusing not on the dolls’ sexy clothing, but on their skin tones.

I was blown away.

Their white dolls were slave owners and underground railroad conductors; the black dolls were runaway slaves, empowered by Harriet Tubman.  And as they played, the girls imagined that they had “raggedy clothes.”

This kind of play was possible for one important reason: Bratz dolls featured more racial diversity than the other dolls the girls owned.  Even though the dolls directed children to focus on fashion, the girls in my study had enough agency to use these dolls in a way that MGA never imagined. In this instance, at least, diversity trumped too-sexy fashion play.

To me, this experience presents an important reminder to parents, educators, and critics: In addition to critiquing children’s popular culture, we need to spend time with children, exploring how they play and watch media. It’s important to get as full a picture as possible. Children have agency–and witnessing this process in action won’t necessarily mitigate our concerns, but it might challenge some of our assumptions.

P.S. Don’t think for a minute that the Bratz dolls’ racial diversity vindicates the brand. I’m not happy that Bratz are back in the market, even if their marketing team has promised they’ll be more “wholesome” this time around. Sorry, but girls wearing bustiers in the new Bratz ads? Please. I’d rather see an affordable line of dolls that are racially diverse and non-sexualizing gain success.

Parents: Any suggestions on good, affordable, diverse alternatives to Bratz?

← Gift-buying guide for children
My Little Pony: Even better than The Powerpuff Girls →

7 Comments on “Challenging our assumptions: Is there anything good about Bratz?”