New at the Disney Store: Princess Dolls with Extra Sparkles! (and extra problems)

On a recent visit to my local Disney Store, I learned that Disney had just released a new line-up of Disney Princess dolls at the holidays. The new line-up was on the shelves–and so were some of their older counterparts.*

All of the dolls had new face molds (with larger eyes) and new dresses (which were sparklier than ever). Here’s what I saw: 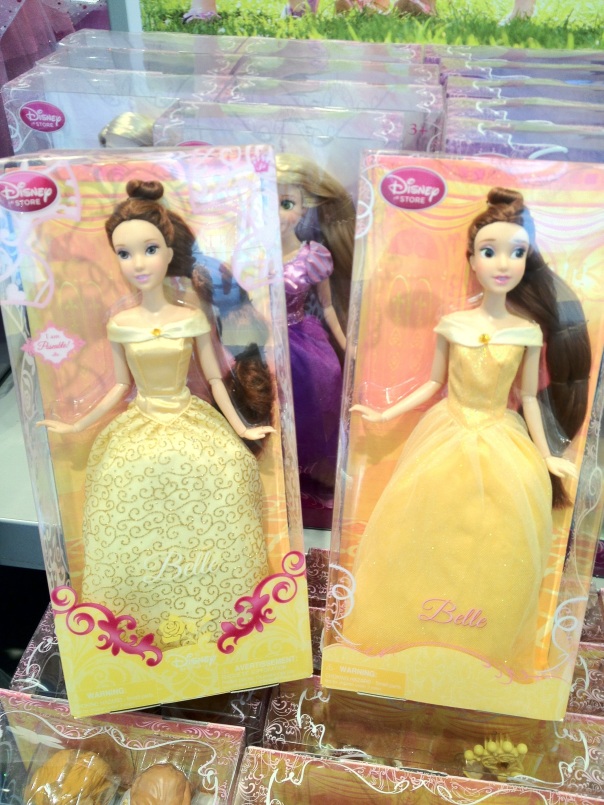 The old Belle doll (left) has sparkling swirls on her gown's skirt, while the new Belle's dress is 100% sparkles. She also looks kind of worried. What's wrong, Belle?

The old Jasmine doll (left) has sparkly swirls on her pants, while the new doll's outfit is sparkly all over. Great news: She isn't wearing eyeshadow! She looks a little angry, though. What's wrong, Jasmine?

Our local store only had the newer Mulan doll in stock. It made me a little sad: Disney seems to want to “girl up” its tomboy. (Maybe that’s why the new Belle doll looks worried!) Check out Mulan’s tulle: 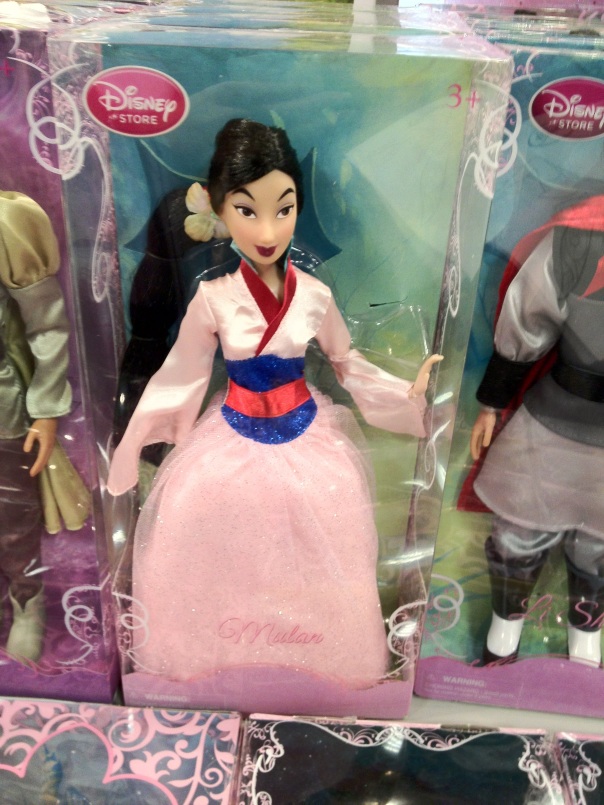 Hey, Mulan! Where'd you get that enormously poofy pink gown??

They didn’t have last year’s doll in stock (a sign that customers who like Mulan want a dress that’s true to the character?), so I found these online:

The old Mulan doll has swirly sparkles, like all of the older models; hers are just around her waist.

Watch out, Mulan--you're being swallowed by a rampaging ball gown. Run!!!

Did they put Pocahontas in a ball gown, too?

Not cool, Disney. Not cool at all.

In short, the new dolls have some good points (e.g., less makeup, a wider range of facial expressions) and some that cause concern (e.g., Mulan’s westernized dress and Pocahontas’s lightened skin).

Parents and Disney fans: What do you think of the new dolls?

*Note: My local Disney store did not have the older models of several dolls, including Rapunzel and Tiana (which have been selling very well). Has anyone seen the other dolls side by side? What did Disney do well? What could they do better next time?

← “Chess for Girls,” or how Saturday Night Live predicted the future.
Save the Childhood Studies program at Rutgers University! →

10 Comments on “New at the Disney Store: Princess Dolls with Extra Sparkles! (and extra problems)”