Do you object to sexy Halloween costumes for little girls? 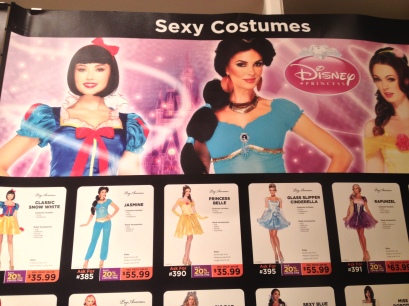 When confronted with Monster High costumes for girls ages 4 to 14, are you appalled because they are far too sexy for our children?

Then I’d like to point something out: You should object to the sexualized aesthetic of girls’ dolls, too.

Here’s what I’m thinking. The internet is full of objections to sexy Halloween costumes for little girls. Just a few weeks ago, Walmart’s “Naughty Leopard” costume generated so much outrage that the retailer was forced to pull the costume from shelves–and rightfully so.

But when critics call out dolls like Monster High, Ever After High, Equestria Girls, Fairy Tale High, and Bratz for being too sexualized for girls, people rush to defend them.  Sexy dolls for little girls are so common, so ubiquitous, folks can’t see them clearly anymore.

They say: “Stop reading so much into it! Girls see these dolls as cute and fun. It’s just fantasy. If you think these dolls are ‘sexy,’ then wow–you’re the one with the problem. Get over it.”

I should know: As a children’s culture critic, I’m on the receiving end of these comments all the time.

But these dolls? They are dressed in outfits exactly like the sexy Halloween costumes. There is no difference between what popular fashion dolls wear and the little girls’ Halloween costumes that everyone objects to.

If anything, the dolls are even worse.

What’s going on, then? Why do we object to the Halloween costumes and not the dolls?

When we actually see these tawdry outfits on our children, we are horrified. We have become desensitized to dolls for four-year-olds that look like prostitutes, but when real children wear the same get-ups, the scales fall from our eyes. Suddenly, we can see the unvarnished truth about children’s culture, and it is awful.

So I’d like to suggest a new litmus test for girls’ dolls. Would you want to see your daughter, niece, or granddaughter in a Halloween costume based on the doll’s attire? No? Then harness that insight. See the doll for what it is: A sexualized item with no business in a child’s toy box. Just say no to sexy Halloween costumes–and say no to sexy fashion dolls, too.

← Disney’s Obamacare “inspiration” not as great as it sounds.
“Am I Pretty or Ugly” Videos a Symptom of Toxic Media Culture →