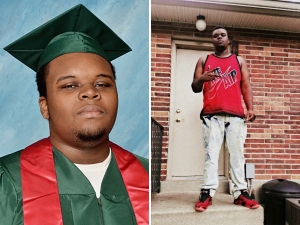 Today, the St Louis Post-Dispatch published an op-ed my colleague Robert Brown and I penned, critiquing the media coverage of Mike Brown’s shooting in Ferguson, MO. Here’s an excerpt:

Twenty-three years after Rodney King and just two after Trayvon Martin, the tragic story of unarmed black youth like Mike Brown being shot dead by police is an all-too-common one. But news media fuel the fires of racism every time they choose an accompanying photograph in which the victim resembles not the beloved son, brother, and friend his loved ones say he was, but the scary thug police assume he was. […]

Selecting such unsympathetic photographs to represent young men who have been forever silenced through death–who can never tell their side of the story–is unjust. It also echoes broader patterns in film and television, in which black men are too often depicted not as three-dimensional human beings, but as threatening menaces–a stereotype that media critics and organizations have critiqued for decades [….].

According to experimental studies, this same stereotype causes police officers to make split-second, erroneous decisions to shoot unarmed black men–but not their white counterparts […]. The politics of the media’s race representation have real, material consequences for all people, but for black youth, media representation can be a matter of life or death.

What the news media need to learn is that their photo selections create a split-second bias in the public arena. And that, too, can be a matter of life and death.

You may read the op-ed in its entirety here.

Rebecca Hains is a media studies professor at Salem State University. Her book, The Princess Problem: Guiding Our Girls Through the Princess-Obsessed Years, is now available for pre-order from Amazon.

← Girls, strength, and the beauty ideal: A beach conversation
Announcing my new book, The Princess Problem! →

One Comment on “Op-ed: Media’s choice of photos creates a split-second bias. #Ferguson”