Woman harassed with “Rape Room” joke, then fired for complaint—but rape is not a joke.

Posted on September 4, 2014 by Rebecca Hains

Rape is not a joke. It’s an act of violence. Therefore, if a male employee makes unwanted “jokes” about rape to a female co-worker, it’s logical to conclude that his actions are creating a hostile work environment. Right?

Well, that’s what one woman here in Salem, Mass. alleges happened to her earlier this week. On her twitter page and in a Salem facebook group, she reported that while she was in training for her new job at Harrison’s Comics, a male co-worker told her that a specific storage room is called “The Rape Room.” When she replied, “That’s not okay,” she says he retorted, “It is if they can’t talk.”

Later, she says, the same co-worker touched her inappropriately, putting his arm around her and pulling her close while they were working.

She explained in the facebook group that when she complained to the owner, “He brushed it off because he is friends with the guy. He told me he didn’t want to make waves. I was off on Monday and when I went for my shift yesterday I was not even allowed in the store. The guy who made the rape joke blocked my entrance and told me I was fired. I fully admit I could be wrong but this does not seem like a coincidence.”

I don’t know whether her claims are true or not, but my inclination is to believe her. That’s not what I’d like to discuss today, though.

What stood out to me as I followed the coverage of her allegations today was this: As her story spread around the internet, numerous people suggested that she just needs to lighten up. After all, the “Rape Room” comment was just a joke. The attitude seems to be: Can’t she take a joke? 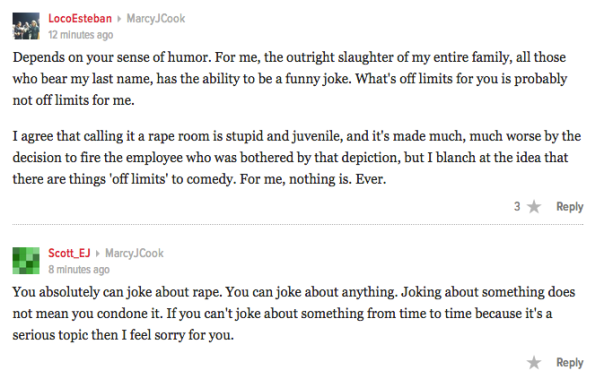 The trivialization of this woman’s story is part of a broader pattern—one in which it’s all too clear that rape culture continues to be part of mainstream society. Despite endless efforts to educate people about the way our society treats women—to remember that rape is not a joking matter, and that treating women like actual people should not be controversial—recent headlines have included:

For context, here are a few facts about rape culture:

I’ve said it before, and I’ll say it again: Rape is not a joke.

So, returning to the allegations regarding the “Rape Room” joke, the unwanted touching, and the retaliatory firing: It’s worth noting that Salem, Mass. is a No Place for Hate community. These types of actions would be a violation of the city’s non-discrimination ordinance. The Mayor’s Office reports that they have asked the Salem Police to investigate the situation. If I hear of any updates to this story, I’ll share them here.

Rebecca Hains is a media studies professor at Salem State University. Her book, The Princess Problem: Guiding Our Girls Through the Princess-Obsessed Years, is now available for pre-order from Amazon.

6 Comments on “Woman harassed with “Rape Room” joke, then fired for complaint—but rape is not a joke.”