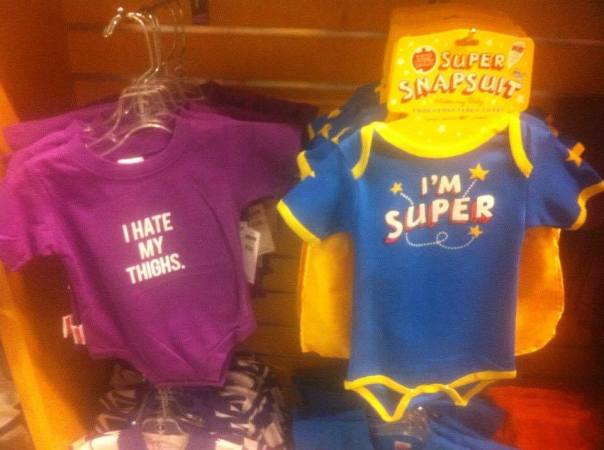 Yesterday, NYU employee Jason Y. Evans snapped this photo of an “I hate my thighs” onesie for infant girls in the NYU bookstore.

He alerted several student and alumni groups, and they complained to the bookstore. In fewer than eight hours, the bookstore had removed the onesie from its shelves.

To many, however, it’s shocking a university bookstore had stocked the item in the first place. It’s the same onesie that made international headlines two weeks ago after being roundly condemned by critics for body-shaming baby girls. The t-shirt’s producer responded to that original controversy in a tone-deaf (or perhaps intentionally baiting) way, claiming it was “ironic,” adding further fuel to the fire.

Evan’s photograph has prompted another round of attention for the onesie in part because of the contrast between the girls’ body-shaming onesie and the boys’ “I’m super” onesie. Their presentation together underscores the differences in girls’ and boys’ socialization regarding self-esteem and body satisfaction in a truly heartbreaking way. (As one commenter on my Facebook page remarked, it “pretty much sums up the difference between clothes design for boys and for girls.”)

Kudos to the NYU community for letting the NYU bookstore know that this kind of product is unacceptable. It’s a good reminder that collective outcry can make a difference, however small. With any luck, other retailers will pay attention, pull this item from their shelves, and send it back to the manufacturer for a refund, hitting them where it hurts.

On the NYU Bookstores Facebook page, a bookstore spokesperson confirmed the product had been pulled, noting it had been their “oversight” in stocking it in the first place:

As one commenter on my page noted, however, it’s mind-boggling that products like these go through so many levels of approval and are approved at every step of the way, from concept development to presentation at retail:

Consumers need to continue the backlash and let corporations of all kinds know that they will not earn our patronage by body-shaming girls.
———

Learn how to raise empowered girls in a princess world: The Princess Problem by Rebecca Hains.

Rebecca Hains, Ph.D. is a media studies professor at Salem State University and the author of The Princess Problem: Guiding Our Girls Through the Princess-Obsessed Years, a book meant to help parents raise empowered, media-literate daughters.

← In Disney’s ‘Cinderella,’ courage and kindness are a victim’s strengths, but a film’s weakness
YMCA pool to mom: Baby girls need to wear swim tops. But, why? →